Abhimanyu, the son of Arjuna and Subhadra is one of the most celebrated heroes of the Mahabharata epic.

The Pandavas had got half the kingdom.

They had settled down at Indraprastha.

Arjuna went on a pilgrimage. Krishna was his friend.

He met Krishna at Somnath.

Arjuna was well respected and taken care of at Dwaraka.

There, he saw Krishna’s sister Subhadra and was attracted towards her.

He expressed his desire to marry her to Krishna.

Those days, swayamvara was a widely prevalent practice for marriage among the Kshatriyas.

But Krishna told Arjuna that he was not very sure whether Subhadra would make the right choice during a swayamvara.

Another method of marriage permitted for the Kshatriyas as per dharma-shastra was abduction of the bride.

Krishna told Arjuna to abduct Subhadra and take her to Indraprastha.

Accordingly, Arjuna abducted Subhadra from the holy Raivataka Parvata which Subhadra was visiting to perform puja.

It was love at first sight for Subhadra as well.

Even though the Yadavas were enraged initially, Krishna convinced them and they reconciled.

Click below to listen to Arjuna Krita Durga Stotram 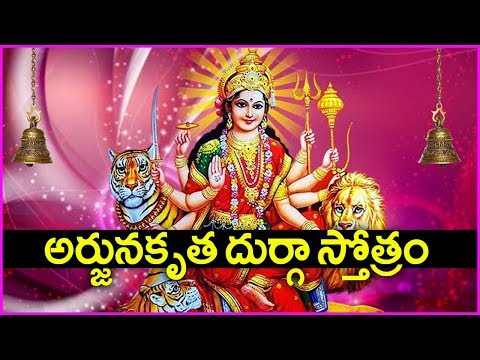 Abhimanyu became the favorite of Krishna.

He learned the Vedas.

From his father, Abhimanyu learned the four padas of Dhanurveda.

Dhanurveda has got four padas or four types of arrows:

Then he learned the ten Angas (parts) of Dhanurveda:

Then he learned the use of regular weapons such as swords and also the divine weapons.

Abhimanyu also learned the science of the making of weapons.

Upon completion of his training, Arjuna became happy that his son had become equal to himself.

After twelve years of vanavasa, the Pandavas spent one year of ajnatavasa at the palace of King Virata.

Uttara was King Virata’s daughter. Arjuna disguised as a eunuch taught her dance and music.

At the end of ajnatavasa, when the identities of the Pandavas became known, the king requested Arjuna to marry Uttara.

Arjuna refused saying that a teacher’s position was like a father's.

Instead, Arjuna agreed to accept her as his daughter-in-law.

Thus wedding of Abhimanyu and Uttara took place in the presence of Krishna and other relatives.

Even though the marriage lasted only for six months, they were most affectionate towards each other.

When Abhimanyu died, Uttara was pregnant with Parikshit, the only descendent of the Kuru Vamsha.

Ahead of the war, it was decided that Abhimanyu would handle the Kosala King Brihadbala and Duryodhana’s son.

Abhimanyu faced Brihadbala, one of his prime targets on the first day itself.

Brihadbala, King of Kosala was the descendent of Lord Rama.

Isn’t it a paradox that the descendent of Lord Rama who not even deviated once from dharma, now was an ally of the Kauravas?

Brihadbala could manage to cut down Abhimanyu’s flag.

Abhimanyu retaliated by killing the guards and charioteer of Brihadbala, cutting his flagpost, and injuring Brihadbala himself with nine arrows.

Bhishmacharya was leading the Kaurava army from the front.

He was unleashing death upon the Pandava side. Abhimanyu broke open Bhishmacharya’s protective cover and charged at him.

Maharathis such as Shalya, and Kritavarma tried to stop him.

Bhishmacharya had to resort to the use of divine weapons to protect himself from Abhimanyu.

Duryodhana himself had to intervene to save his son from Abhimanyu.

It looked as if there were two Arjunas fighting together.

Within a short span, they eliminated 10,000 enemy soldiers.

He cautioned his uncle by shooting an arrow at the leading elephant and killing it.

Bhima killed the rest of them.

On the 5th day, Abhimanyu had killed the most number of Kaurava soldiers.

A fight between Abhimanyu and Lakshmana took place again.

Lakshmana was severely wounded by Abhimanyu’s arrow. Shalya had to rescue him.

Bhima and Dhrishtadyumna were caught up alone in the middle of the Kaurava army.

Bhima had gone there alone and Dhrishtadyumna also joined him.

Seeing this, Yudhishtira sent Abhimanyu for their help.

Abhimanyu made a formation that looked like a needle and pierced the enemy ranks.

Seeing Dronacharya killing Dhrishtadyumna’s horses and smashing his chariot, Abhimanyu rescued him and took him into his own chariot.

A terrible fight between Abhimanyu and Vikarna also took place on the 6th day.

Abhimanyu resisted the advance of Dusshasana, Vikarna, and Chitrasena together.

He broke their bows, killed their charioteers, and horses.

Abhimanyu spared their life because it was Bhima who should kill all the Kaurava brothers as per his vow.

On the 7th day also Abimanyu faced Bhishma and stopped his movement.

On the 9th day, when Abhimanyu charged at the Kaurava army, they had no option but to turn back and run for their lives.

Abhimanyu was ruling the battlefield.

He pushed back Dronacharya, and Kripacharya who attacked him together.

Ashwatthama and Jayadratha could not even go near him.

Alambusha, the Rakshasa on the Kaurava side came.

He created darkness around the Pandava army making them all blind.

Abhimanyu dispelled the darkness with a divyastra.

Abhimanyu destroyed Alambusha’s magical power. He became visible. The Pandava princes attacked him. He had to flee.

Abhimanyu and Arjuna together attacked Bhishmacharya.

Half of Dhritarashtra’s sons had to line up to defend Bhishmacharya from them.

On the 9th night, the Pandavas visited Bhishmacharya.

At that time, Bhishmacharya told Arjuna: Your son, Abhimanyu, what a marvel he is.

I sometimes think, he is smarter than you, or at least he will become.

You are a lucky father.

Abhimanyu and Dhrishtadyumna together had attacked Bhishmacharya.

It was on this day Bhishmacharya fell down.

The Kauravas had formed a Shakata-vyuha on this day.

Abhimanyu easily broke it and killed a hundred soldiers while doing it.

Jayadratha had to run away from Abhimanyu to save his own life.

Shalya shot an arrow with flames at Abhimanyu.

He caught it with his hand and shot back at Shalya.

It killed Shalya’s horses and charioteer.

Shalya attacked Abhimanyu with his gada, but Bhima intercepted and diverted him.

Bhagadatta had an elephant as huge as a mountain and as fierce as death itself.

Even Bhima had to hide under the elephant’s own belly to escape from its attack.

This was the fatal day for Abhimanyu.

The day he became also famous as an equal to Arjuna and even Lord Krishna.

It was the third day after Dronacharya became the Senapati of the Kaurava army.

He ordered the formation of the dreaded Chakra-vyuha.

What did the Pandavas do?

Bhima was at the head of the Pandava army.

Yudhishtira, Nakula, Sahadeva, Ghatotkacha, and the rest of the Maharathis led hundreds of thousands of soldiers towards the vyuha.

But they could not even go beyond Dronacharya.

As the vyuha advanced towards them, thousands of Pandava soldiers lost their lives.

Only four people knew how to break the Chakra-vyuha.

Krishna and his son Pradyumna.

Arjuna and his sona Abhimanyu.

Arjuna was fighting the mercenaries (suicide soldiers) that the Trigarthas had engaged to kill him.

It was a planned strategy of the Kauravas to keep Arjuna and Krishna away from the Chakra-vyuha.

Yudhishtira told Abhimanyu to go ahead and penetrate the Chakra-vyuha.

He was going to bring glory to the vamshas of his father and mother.

But he said: I know only how to break it and go inside.

I don’t know how to come out.

We are right behind you.

You only have to break it open.

We will guard you from behind.

How did Abhimanyu break the Chakra-vyuha?

Abhimanyu knew the vulnerable points at the perimeter of the Chakra-vyuha.

He charged straight ahead.

His charioteer cautioned Abhimanyu: Please think about it.

It is the formidable Dronacharya who is ahead.

Abhimanyu said: Forget Dronacharya, even Indra on Airavata or Rudra will not be able to stop me today.

This entire Kaurava army is just one-sixteenth of my power.

Drona and his warriors resisted him for two muhurtas (48 minutes) but then Abhimanyu went past him and broke into the Chakra-vyuha.

The Pandavas could not get inside, Abhimanyu was left alone.

How could Jayadratha do that?

He had a boon from Lord Shiva that if Arjuna and Krishna were not there, he could single-handedly resist the rest of the Pandavas.

What happened inside the Chakra-vyuha?

The dastardly act of cowardice

The first chapter of Bhishma Parva vide shloka nos. 27 to 32 gives the rules of engagement mutually agreed upon by both the Pandavas and the Kauravas.

The instructions that Dronacharya gave to overpower Abhimanyu were in blatant violation of these rules.

This is clear from Chapter 48.

Karna did exactly that.

He slid behind Abhimanyu and cut his bowstring with an arrow from behind.

Thus after disarming him you will be able to kill him.

A clear violation of the rule that क्षीणशस्त्रो न हन्तव्यः.(someone who has lost his weapons should not be attacked)

Seeing his bow broken, the six Maharathis together showered arrows upon Abhimanyu.

Violation - Abhimanyu had lost his bow. He should not have been attacked with arrows.

Then, Abhimanyu picked up his sword and shield.

Dronacharya cut his sword into two pieces with an arrow.

Karna shattered his shield with arrows.

Violation - Abhimanyu only had a sword and shield with him.

He should not have been attacked with arrows.

Abhimanyu picked up a wheel from his broken chariot and rushed towards Dronacharya.

The Maharathis together shattered the wheel to pieces.

Abhimanyu picked up a gada and attacked Ashwatthama.

Seeing that, Ashwatthama went back three steps in his own chariot.

Abhimanyu’s hit with the gada killed Ashwatthama’s horses and guards.

With the gada, Abhimanyu smashed the chariot of Dausshasani, Dusshasana’s son.

Dausshasani also retaliated with his gada and a fierce fight took place between the two.

At one point, both fell down on the ground.

Dausshasani got up first and smashed Abhimanyu’s head with gada.

Mahabharata concludes the episode of the killing of Abhimanyu saying:

Thus in the war, a single warrior was killed by many.

As Krishna told Vasudeva later:  If they had fought with him one-by-one even without a break, he would have killed them all.

Why them, even Indra could not have defeated him.

Before his life ended, Abhimanyu had killed thousands of kings, soldiers, elephants, and horses.

He had also destroyed eight thousand chariots all by himself.

Why Abhimanyu had to die at such a young age

Abhimanyu was an incarnation of the son of Chandradeva.

He had come to assist Lord Krishna in eliminating evil At the time of sending him to earth,

Chandradeva had told him that he should return on the sixteenth year.

Sage Vyasa came to the uncles of Abhimanyu who were mourning his death.

He told them that Abhimanyu had already reached Swargaloka.