Who was Jarasandha in his previous birth?

Mahabharata was a Devasura battle on the surface of the earth.

The Devas incarnated as the Pandavas and their allies.

The Asuras incarnated as the Kauravas and their allies.

Viprachitti was the foremost among the sons of Danu and Kashyapa.

Click below to watch video on Jarasandha's killing by Bhima 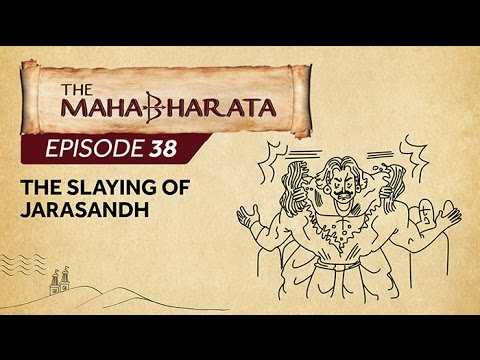 The Pandavas got half the kingdom.

They established themselves with Indraprastha as their capital.

Now, it was time for expansion.

Yudhishtira was to perform Rajasuya Yaga to become an emperor.

A conquest in all four directions should be performed as part of this.

This was to subjugate other kingdoms.

A king if he is able to successfully complete Rajasuya becomes Sarvajit (conqueror of all).

Jarasandha of Magadha was their greatest challenge.

Krishna explains the power of Jarasandha to Yudhishtira:

Jarasandha is the emperor of the middle portion of the earth.

He has overpowered all the other kings.

He is the lord of all the kings.

Shishupala serves him as the commander of his army.

King of Karusha, Dantavakra with illusory powers has become his disciple.

The king of the Yavanas, the most powerful in the west, Bhagadatta who defeated Naraka, and Mura, even he bows his head before Jarasandha.

Poundraka Vasudeva is loyal to him.

Bhishmaka (Rukmini’s father), who rules over one-fourth of the world, pays respects to Jarasandha.

Eighteen clans of the Bhojas of the North have fled to the West fearing Jarasandha.

Even kings of Southern Panchala, Eastern Kunti, Kosala, Matsya, and Sanyastapada have fled to the South.

All the Kshatriyas of Panchala have run away wherever they could.

Kamsa derived his power from Jarasandha.

Even if the eighteen clans of Yadavas under Krishna, and Balarama tried for 300 years, still they would not be able to defeat him.

They had to relocate to Dwaraka under perpetual attack by Jarasandha.

Why was it necessary to kill Jarasandha?

Except for those very powerful kings who accepted his supremacy or fled, he tortured all others.

Once their number reached a hundred he was going to sacrifice them.

With Jarasandha alive, it will be impossible to perform Rajasuya.

The world should not think that the Pandavas were scared of him.

Brihadratha was the king of Magadha.

He was a great ruler and performed many yagas.

He was as powerful as Indra, as brilliant as Surya, as tolerant as Bhumi, as fierce as Yama, and as wealthy as Kubera.

He had two wives, both princesses of Kashi.

He loved them both alike.

He didn’t have children.

Once, a very powerful Muni, Chandakaushika visited his kingdom.

The king told the Muni his problem.

He took a mango, chanted some mantras and gave it to the king as a blessing.

Muni said: Give this to the queen.

Brihadratha came back, divided the mango into two and gave one half to each of his queens.

He didn’t want to show partiality.

They both became pregnant.

The mango was not supposed to be divided.

Each one gave birth to half a child.

Each half had one eye, one hand, one leg, etc.

Both halves were stillborn.

They were wrapped up separately and abandoned.

After a while, a man-eater Rakshasi called  Jara came by.

She saw the two halves of a human child.

She put them together so that it will be easier to carry.

She wanted to eat them later.

As soon as she put the two halves together, the child became alive.

His body was as hard as a diamond.

He clenched his fists and started roaring like thunder.

Hearing this roar, everyone including the king and the queens came.

They realized what happened.

Jara gave the child back to them.

The king asked her who she was.

She said: I am a Rakshasi.

I can assume any form I want.

I took birth to destroy the Danavas.

I have been living happily in your kingdom.

People worship by drawing my image at their homes.

I protect them and give them wealth.

You are a good king.

I am happy with you.

Now, take back your son.

Brihadratha named his son because he was joined together by Jara.

Due to these mysterious circumstances of his birth, the child became very powerful.

After some time Muni Chandakaushika came again to Magadha.

Your son will be most handsome, strong, and valorous.

No other king will be able to match him in power.

The glory of all other kings will eclipse because of him.

They will all become his dependents.

He will destroy everything that would try to stop him.

Even divyastras can not harm him.

He will be a devotee of Shiva

After installing Jarasandha as the king of Magadha, Brihadratha and his queens left for the forest to do tapasya.

Because Krishna killed Kamsa, his son-in-law, Jarasandha became his enemy.

Declaring war on Krishna, Jarasandha threw a gada from Magadha to Mathura.

It traveled ninety-nine yojanas and landed in front of Krishna.

The place where the gada fell is called Gadavasan.

They were very wise strategists.

With them by his side, Jarasandha became all the more powerful.

Once Balarama and Hamsa fought for eighteen days.

Dimbhaka heard that Hamsa was killed.

He committed suicide by jumping into Yamuna.

But Hamsa came back.

When he came to know that Dimbhaka was no more, he also jumped into Yamuna.

This made Jarasandha all the more angry and frustrated.

Jarasandha should be eliminated before Rajasuya.

He can not be touched by vast armies.

He can be killed only in one-to-one combat.

I know the strategy.

Arjuna has victory in him.

Three of us will go together to kill him.

The timing is ideal because Jarasandha doesn’t have the support of Hamsa and Dindibha.

Grand entry of the trio into Magadha

Girivraja was the capital of Magadha.

Near Girivraja, there was a holy mountain called Chaityaka.

Jarasandha and his subjects worshiped this mountain.

Once, Jarasandha had killed a Rakshasa called Rishabha here.

The Rakshasa had assumed the form of a bull.

With his skin, Jarasandha got three drums made.

Once beaten, they would reverberate for a whole month.

They broke the peak of the mountain and the drums.

Then they entered the capital without carrying any weapons.

They were disguised as Brahmins.

Jarasandha was performing a yaga.

As soon as he saw the Brahmins, he got up and paid respects.

Krishna told Jarasandha that the other two with him were in mauna vrata till midnight.

Jarasandha asked them: The way you have dressed and the mark of bowstring on your fingers, it doesn’t look like you are Brahmins.

You destroyed our holy mountain before coming here.

What is the purpose of your visit?

Krishna said: The way we entered your city, it must be clear to you that we are not your friends.

We have not come here to accept your hospitality.

Jarasandha: But I don’t remember having done any harm to you.

I never harm the innocent.

It must be some mistake that you have come here.

Krishna: We have come at the command of a Kshatriya who never deviates from his dharma.

You are holding many kings as prisoners.

You want to perform human sacrifice with them.

Is that your dharma?

We have come here to kill you and save them.

You might be thinking that nobody can match your strength.

For a Kshatriya, dying in battle is a sure way to ascend to Swarga.

Death in battle is equal to victory.

Do not be arrogant anymore.

Now, you have your equals in front of you.

Then Krishna revealed their true identities.

Jarasandha: Whosoever I have imprisoned, I have defeated them in battle first.

This does not violate Kshatriya dharma.

They are meant to be sacrificed.

I will not let them go fearing you.

I am ready to fight.

With one, two, or all three of you.

An oracle had commanded that Jarasandha should be killed only by Bhima.

That was the reason Krishna and Balarama had spared him during their fight with him at Gomanta mountain.

The fight between Jarasandha and Bhima

They were truly equals in strength and valor.

The earth trembled as they fought.

Thousands gathered to watch them fight.

For thirteen days they fought, without food or sleep.

On the fourteenth night, Jarasandha called for a break.

Krishna hinted to Bhima: You should not prolong a fight with a man who is tired.

He might die of exhaustion (meaning - time has come to kill Jarasandha).

Krishna told Bhima: Show me the strength of your father, Vayudeva.

Bhima lifted Jarasandha up and started whirling him above his head.

This was a sign to Bhima that Jarasandha should be torn into two.

Remember, life had come into Jarasandha’s body not the normal way.

Life came when two halves of his body were joined together.

Life will not leave his body till the time the two halves are together.

Bhima flung Jarasandha down and broke his spine with his knees.

Then he held one of his legs pressed down the other with his leg.

And tore his body vertically into two halves.

The two halves came back together.

Jarasandha got up and again started fighting.

Krishna picked up another grass, tore it into two pieces but this time threw them in opposite directions.

The piece in the left hand was thrown to the right.

The piece in the right hand was thrown to the left.

Bhima got the message.

He overpowered Jarasandha’s body, tore it again, and threw the two halves in opposite directions.

The two halves lying on the wrong sides could not come back together.

That was the end of Jarasandha.

The imprisoned kings were released.

Everyone expressed their gratitude towards Krishna and the Pandava brothers.

Krishna asked them to participate in the Rajasuya Yaga.

Jarasandha’s son, Sahadeva was installed as the king of Magadha.

Sahadeva was an ally of the Pandavas during the Kurukshetra war.

He brought an akshauhini of army to the battleground. Why did Krishna run away from Jarasandha?
Lord Krishna is lovingly called Rancchod (रणछोड) in North India because he left his battle with Jarasandha midway and migrated with his entire clan to Dwaraka. Mahabharata very clearly says that Balarama at one point in time was just about to kill Jarasandha. But then, an oracle was heard that Jarasandha was destined to die at the hands of Bhima. Rajasuya of Yudhishtira was the first step for the Pandavas to show their power to the world. Vanquishing someone as formidable as Jarasandha definitely would help in this. Krishna must have intended to make this happen.

Who was more powerful, Kans or Jarasandha?
Jarasandha was an emperor. Kans was the king of Mathura. Mahabharata says that Kans derived his power from Jarasandha. Kans was Jarasandha’s son-in-law. Krishna killed Kans but did not kill Jarasandha even after 18 battles. Krishna tells Yudhishtira that he, Balarama, and the eighteen clans of the Yadavas would not be able to defeat Jarasandha even if they fought for 300 years.

Who were Asti and Prapti?
Click here to try more questions

Prayer to Saraswati Devi for success in studies