Abhijnanashakuntalam is a renowned work of Sanskrit poet Kalidasa.

The story in brief

Shakuntala is the foster daughter of Kanva.

They fall in love and marry secretly.

The king presents Shakuntala with a ring.

After a few days the king leaves promising to take her with him later.

Shakuntala is in the pain of separation.

Sage Durvasa arrives at the ashrama.

He is well known for his short temper.

Shakuntala is lost in the thoughts of Dushyanta.

She does not notice the Maharshi.

He gets offended and curses.

Whoever Shakuntala was thinking about at that time would forget her.

That was the curse.

Durvasa says that if Dushyanta gets to see any sign of their love, he would remember her.

Kanva gets to know about what happened through an oracle.

He sends Shakuntala to Dushyanta.

She loses the ring on the way in a river.

Dushyanta does not recognize her.

She goes and stays in the ashrama of Marichi Maharshi.

A fisherman finds  the ring and gives it to Dushyanta.

Then he remembers everything.

In the meantime, a son is also born to them.

Later, when Dushyanta gets to his son, he recognizes him.

The Maharshi reconciles the issues between the couple.

Abhijnanasakuntalam was Kalidasa’s first work to be translated into English.

The English translation was again translated into German.

This was so much praised by Goethe that it received attention and appreciation all over the world.

There have been several translations and also adaptations for opera.

What is the meaning of Abhijnanasakuntalam?
Recognition of Shakuntala. King Dushyanta had married Shakuntala secretly. He forgot her due to a curse. Later he remembers her upon seeing a ring that he had given her.

What was the curse of Shakuntala?
Dushyanta had secretly married Shakuntala and returned to the palace. He had promised to take her later. Once, Maharshi Durvasa visited. At that time, Shakuntala was lost in the thoughts of Dushyanta. She did not notice the Maharshi's arrival. Durvasa was offended. He cursed that whoever she was thinking about would forget her.

What is the source of Abhijnana Sakuntalam?
The story of Shakuntala is found in the Mahabharata. It is in chapters 68 to 74 of Sambhava Parva. It is also there in Padma Purana.

Who was Shakuntala's mother?
Click here to try more questions 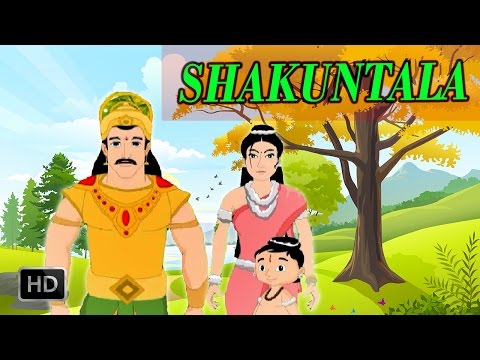