Anasuya was the wife of Atri Maharshi.

She has been depicted as the ideal woman in the scriptures.

She is famous for her power developed through observing pativratya.

Anasuya is the daughter of Kardama and Devahuti.

Once, Narada Maharhi came to Vaikuntha.

Lakshmi Devi asked him: You seem to be so happy, where are you coming from?

Narada said: I am coming from Chitrakoota.

There, I had the fortune of getting darshan of Anasuya, wife of Atri Maharshi.

She is the greatest pativrata in the world.

Even greater than me? - asked Lakshmi Devi.

Yes, even greater than you, said Narada Maharshi.

Lakshmi Devi was offended and jealous.

She went to her husband and said: you have to somehow disrupt her chastity.

Narada then went to Brahmaloka and Kailasa.

In the same manner, he instigated Saraswati Devi and Parvathy Devi.

They also told their respective husbands to try to disrupt Anasuya’s chastity.

The Trimurthys under compulsion from their wives reached Atri’s ashram disguised as sanyasis.

At that time, Atri Maharshi had gone somewhere.

They were offered water to wash their feet and comfortable seats.

When Anasuya got ready to start serving them food, the sanyasis said: we have a condition.

We will take your food only if you serve us without wearing clothes.

Anasuya was petrified, in her whole life she had not even thought about another man.

Now, are these real sanyasis or some con men?

The sanyasis said: we are sanyasis, we are pure at heart, we will accept food only from those who recognize our purity.

Anasuya can not afford to offend them.

What if they are true?

She will have to rot in Naraka for having offended guests.

Anasuya said: if my vow of chastity is genuine, if I have never thought or even dreamt about another man, may these three turn into infants!

Lo and behold, the Trimurthys became infants and started crying.

Anasuya took them onto her lap and started amusing them.

Like a mother, she fed them with her own hands.

Here the divine wives became worried: why are they not coming back.

Did they get trapped by her charisma?

They decided to go to Atri’s ashram.

There, they asked: where are our husbands?

These are your husbands!

The Devis realized what had happened.

They pleaded, give our husbands back to us.

They are yours always, take them.

The Devis did not do what to do.

Their jealousy had turned into misery and embarrassment.

By this time, Atri Maharshi came back.

Who are these children? - he asked.

They are your own sons, my Lord.

Who are these ladies?

They are your daughters-in-law.

Atri smiled: Oh! I went out for a while, you have got yourself three sons; not only that, you got them married as well.

Give back their husbands.

Anasuya sprinkled some water upon the infants.

They turned into Trimurthys again.

Ansuya and Atri asked them and the Devis to sit together and did parikrama of them.

They did sashtanga namaskara before them and apologized.

The Trimurthys said: ask for any boon that you want.

Anasuya said: please bless us by taking birth as our children.

Thus, the Trimurthys took birth as Dattatreya, Soma, and Durvasa, as the sons of Anasuya and Atri.

Devas give a boon to Anasuya

There is another background to the Trimurthys taking birth as Anasuya’s sons.

Sage Mandavya was falsely accused once of theft and left to die on top of a spear in a forest.

A Brahmana and his wife were passing through that forest.

The Brahmana tripped on that spear.

Manadavya cursed that he would die before the next sunrise.

The Brahmana’s wife was a very chaste woman.

With the power that she had developed through pativratya, she stopped the Sun from rising.

If the Sun doesn’t rise, the whole world would perish.

Brahma told them to approach Anasuya; a pativrata would probably listen to another pativrata.

Anasuya convinced the woman to lift her blockade and allow the Sun to rise.

When the Brahmana died of the curse, Anasuya revived her.

In return for this favor, the Devas gave a boon to Anasuya that the Trimurthys would take birth as her sons.

According to Shiva Purana, once when Atri was performing tapas, a great famine occurred.

Atri felt thirsty and told Anasuya to get some water.

As she started looking for water, Ganga herself approached her.

Anasuya went back with water for her husband.

Later, when prayed to by Anasuya, Ganga agreed to stay at that place itself in exchange for the punya acquired by Anasuya in one year. 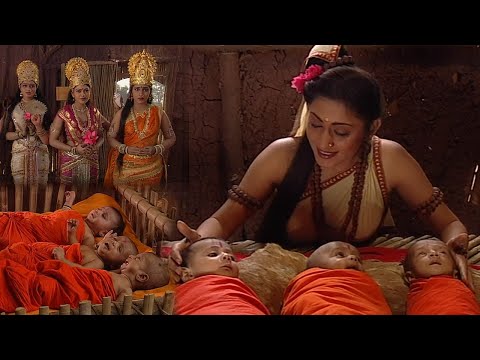 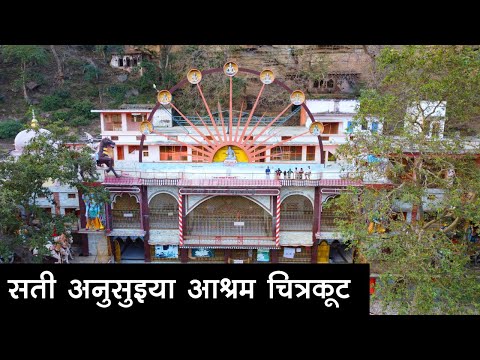