Abhivadanam is the Vedic way of saluting and introducing oneself to elders.

A typical abhivadaye mantra is given below -

You can break it down into the following parts.

Abhivadaye - I am saluting you.

Kaundinyagotrah - I belong to the Kaundinya gotra.

This is called the pravara of the gotra.

Bhoh - similar to Sir in English.

The introduction comprises of one’s own -

Gotras are named after Rishis.

They were originally attributed to the Saptarshis.

But Gotras have subdivided into many more.

According to Matsya Purana, seven Rishis came out of the fire when Brahma conducted a yajna.

Out of these, Pulaha created Rakshasa.

Vasishta died and was reborn in the family of Marichi.

All Brahmins have their origin from Bhrigu, Angiras, Marichi, and Atri.

Eight Rishis are considered to be the founders of gotras.

Thus originally, there were only 8 gotras.

But then, there were some families who had taken up Kshatriyas.

They later came back and there were 10 more gotras.

They connected to Bhrigu and Angiras gotras.

Thus making it a total of 18 gotras.

They are the names of the remotest most important Rishis of that gotra.

There can be multiple Pravaras for the same gotra depending on which and how many Rishis’ names are taken.

Some of the different Pravaras are -

The Pravaras may include Rishis later than Jamadagni also such as -

There are a few more.

Similarly for the other gotras also

Vedas are divided into four - Rigveda, Yajurveda, Samaveda, and Atharvaveda.

Each family traditionally has one among them as their primary Veda.

This is the Veda they have to learn first.

Grihya Sutras are books detailing procedures of various rituals such as upanayana, and marriage.

For the same Veda shakha, there can be different grihya sutras.

While saying abhivadaye mantra, the palms of both hands are held open near the respective years.

After saying the mantra, with your right-hand touch the right foot of the person whom you are saluting.

With the left-hand touch the left foot.

This is done together.

The right-hand crosses over the left-hand.

The right-hand should be on top.

Then as per tradition, you can also do a sashtanga namaskara.

The person who is being saluted saying -

The saluting person’s name also can be used in the place of saumya. 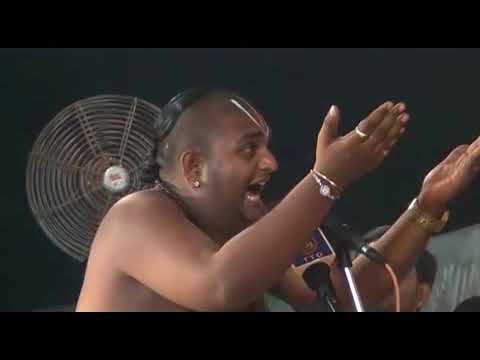