In every way they could, the Kauravas tried to prevent the Pandavas from attaining power and any control over the kingdom.

Lacquer is a highly flammable material.

A palace was built using lacquer as the primary material at Varanavata.

Dhritarashtra asked the Pandavas to move there with their mother Kunti. 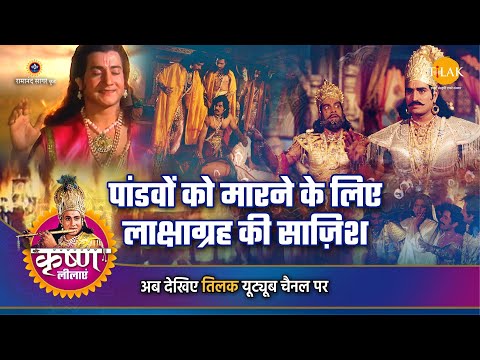 Purochana, a confidant of the Kauravas, was appointed caretaker of the Lakshagriha.

He was supposed to set fire to the Lakshagriha and kill the Pandavas and their mother.

He should do so only after the Pandavas settled down and became comfortable there.

Vidura was the paternal uncle of both the Pandavas and the Kauravas.

As soon as he learned about the Kauravas' plot, he dispatched a messenger to inform the Pandavas.

The same messenger would also secretly build a tunnel.

Through this tunnel, the Pandavas can escape from the Lakshagriha.

In one year, the tunnel was completed.

This was unknown to Purochana.

Who set fire to the Lakshagriha?

The Pandavas wanted to be in control of the situation.

So they waited for an opportunity.

A drunken huntress and her five sons visited the Lakshagriha one day.

The huntress was so drunk that they slept there.

Bhima took advantage of the opportunity and set fire to the Lakshagriha.

The Pandavas and Kunti escaped through the tunnel.

People saw the charred bodies of a woman and five men.

They thought it must be the Pandavas and their mother.

The Pandavas wanted the Kauravas to believe that they had perished in the fire.

So they stayed in disguise.

As soon as they came out of the tunnel, they moved into the forest.

Then they kept on moving from place to place.

Their identities were revealed only after Draupadi's swayamvara.

For A Safe Pregnancy And Healthy Baby