This is the story of how Little Krishna killed Aghasura, a huge wicked monster.

Aghasura was a commander of Kamsa. 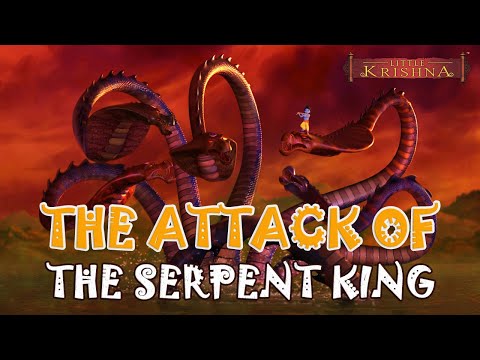 He was very cruel and wicked.

He put his own father in prison and became the king of Mathura.

At the time of the wedding of Krishna's parents, an oracle was heard that their eighth son would kill Kamsa.

Kamsa imprisoned them and killed each child as soon as it was born.

How did Krishna escape?

Krishna is the Almighty.

When he was born, he prompted his father Vasudeva to take him out of the prison.

The Lord was taken to Gokula and left at the house of Nanda who was Vasudeva's cousin.

At the same time, a girl child was born to Nanda - Yashoda couple as well.

She was brought to prison.

What happened to that girl?

Even though it was a girl, Kamsa tried to kill her.

But she was an incarnation of Goddess.

She slipped out of the hands of Kamsa and disappeared.

She is worshiped as Goddess Vindhya Vasini.

What did Kamsa do when he realized that Krishna was alive?

Kamsa started sending many monsters to Gokula to kill Krishna.

Aghasura was one among them.

What did Aghasura do in Gokula?

He came flying through the sky and saw Krishna and his friends playing on the banks of river Kalindi.

He became a huge snake and lied down on the ground with his mouth wide open.

The boys thought it was a cave and went inside casually.

When Krishna and all the boys were inside,

Aghasura closed his mouth and started crushing them. Some of the boys died.

How did little Krishna kill Aghasura?

He became so huge that Aghasura's body was burst open.

Krishna through his divine power revived those boys who had died.

Others came out safely.