Achyutananda Dasa was a 16th century Saint poet of Odisha.

He was also known as Gopala Guru.

Right from childhood, Achyutananda was unattached to the world.

At a very young age, his father brought him to Puri where he received deeksha from Chaitanya Mahaprabhu.

After this, he returned to Tilakana, his village near Cuttack.

Achyutananda got realization while meditating under a banyan tree.

Then he received a higher level of deeksha from Chaitanya Mahaprabhu.

Krishna is the supreme truth.

Krishna is self-caused and the universe originates from him.

Nirguna should be achieved through saguna.

What someone does only decides his status, not his caste by birth.

It is not a single path that leads to the peak of spiritual achievement.

Only a person who stands at the peak can see the many paths leading to it.

Chanting the divine names and inner purity are very important.

There were five prominent authors in Odisha.

They were friends and known as Panchasakhas.

They translated many important Sanskrit works into Odiya.

Achyutananda was one among them. 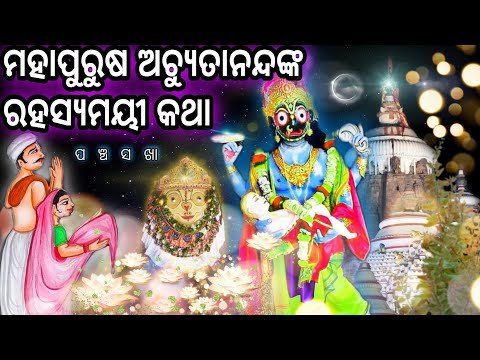