Muthuswami Dikshitar popularly known as Dikshitar is one of the most famous composers of Carnatic music.

He was also a poet, singer, and Veena player.

He is one among the Trinity of Carnatic Music, the other two being Thyagaraja and Syama Sastri. 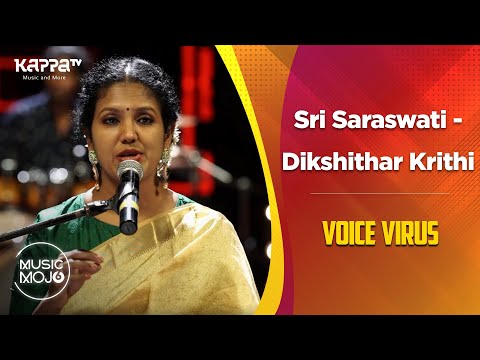 Venkateswara Dikshitar, the grandfather of Muthuswami Dikshitar lived in Virinchipuram in Tamil Nadu along with his wife Bhagirathi.

A son was born to them in 1735 AD and he was named Ramaswami.

The family relocated to Govindapuram village near Tiruvidaimarudur. Ramaswami Dikshitar learned music under Virabhadrayya at Thanjavur.

This included knowledge of the seventy-two Melas and the Janya ragas.

Ramaswami Dikshitar settled down at Tiruvarur and gave concerts.

He was also a notable composer.

Ramaswami Dikshitar did not have children. He was a Srividya upasaka.

His guru was Chidamabaranatha Swami.

Ramaswami Dikshitar worshiped Balambika of Vaitheeswaran Koil through Mandala Puja for 40 days for begetting a child.

On the last day, Devi appeared in his dream and presented him with Muktaharam (garland of pearls) as if she has answered his prayers.

Ramaswami Dikshitar's wife, Subbammal soon conceived and gave birth to a son on 24, March 1775 when the Vasantotsava was being celebrated at Sri Tyagarajaswami Temple.

He was named Muthukumaraswami after Lord Murugan of Vaitheeswaran Koil Temple.

The name also stood for the Muktahara that Devi gave in the dream.

He also had one sister, Balambika.

Muthuswami Diskhitar started learning both singing and Musicology from his father.

He was trained in the Lakshana Gitas of Venkatamakhi.

Theoretical and practical knowledge, both played major roles in his development as a great composer.

He learned Veena as well.

Shifting of the family to Manali

Manali near Chennai at that time was a small state.

Muthukrishna Mudaliar was its head.

He once heard Ramaswami Dikshitar singing at Sri Tyagarajaswami Temple and was highly impressed.

He invited Dikshitar to join him as his Samsthana Vidwan.

Dikshitar received the continued patronage of his son Venktakrishna Mudaliar and has even composed a Ragamalika of 108 Ragas and Talas in his honor.

Muthuswami Dikshitar often accompanied Venkatakrishna Mudaliar to Fort St.George and had the opportunity to listen to the English band playing melodies.

But he made it a point that they were all in praise of Hindu Gods and Goddesses.

Muthuswami Diskhitar was impressed with the role of the Violin in the English band and was later instrumental in popularizing its adoption in Carnatic Music concerts.

Once, Ramaswami Dikshtar's Guru, Yogi Chidambaranatha Swami visited them and asked that Muthuswami Diskhitar be sent with him to Kashi.

After visiting several holy places, they reached Kashi after a few months and lived there for about six years.

Muthuswami Diskhitar was initiated into Srividya sadhana and he also learned Yoga and Vedanta under Chidambaranatha Swami.

His day was occupied with the practice of Yoga, darshan at Vishwanatha and nearby temples, chanting of Vedas, singing, playing Veena, and puja.

In this way, he was fully oriented towards a spiritual life filled with devotion and pursuit of knowledge.

He has written songs praising Kashi Vishwanatha, Vishalakshi, Annapurna, Kala Bhairava, and several other deities all along North India like Pashupathinath, and Badrinath.

As pointed out earlier, Muthuswami Diskhitar was trained in the science of music propounded by Venkatamakhi.

Several Hindustani ragas were taken into Carnatic music by Venkatamakhi and he had written Lakshana Gitas for them.

Muthuswami Diskhitar had a strong liking for Hindustani music.

He listened to and learned Hindustani Music at Kashi and composed several songs based on pure Hindustani ragas.

Muthuswami Diskhitar restored to the original many Hindustani Ragas which underwent modifications in Carnatic Music.

Many of the adopted ragas regained their purity except for their name change.

One day, Chidamabaranatha Swami told Muthuswami Diskhitar that the time has come for him to return home.

He told Muthuswami Diskhitar to step into Ganga and take hold of what he gets.

It was a Veena with Lord Rama's name inscribed on it.

After giving it to Muthuswami Diskhitar as his blessing, Chidambaranatha Swami walked into Ganga and disappeared.

Getting darshan of Lord Subrahmanya

After returning to Manali, Muthuswami Diskhitar went to do Mandala Bhajana at Tiruttani Sri Murugan Temple.

The aim was to gain spiritual knowledge.

On the 40th day, suddenly an old man came to Dikshitar, called him by his name, told him to close his eyes, and open his mouth.

The stranger put something in Dikshitar's mouth and asked him what it was.

Diskshitar said it was a sugar candy.

When he opened his eyes, the old man had disappeared, and in his place was Lord Subrahmanya seated on a peacock along with his consorts Valli and Devasena.

The beauty of this song is that in the pallavi, it implies the arohana and avarahona in three speeds, the first basic lesson imparted to beginners in Carnatic music.

Each of these eight songs is composed using one of the eight vibhaktis of Sanskrit grammar.

Muthuswami Diskhitar was only twenty-five years when he composed these songs.

Lord Balaji was his family deity.

In that song calling himself Abhinava Guru-Guha, Muthuswami Diskhitar for the first time proclaimed his Mudra as Guru-Guha.

Then he went to Kalahasti and praised the Vayu-lingam by composing Sri Kalahastisha in Raga Huseni.

When he was still a student at Tiruvarur, Muthuswami Diskhitar got married.

He had two wives as was common practice those days.

Dikshitar led the life of a Yogi and was traveling to holy places most of the time.

He visited many temples and composed songs praising the Gods and Goddesses there.

He had one daughter.

The family of Muthuswami Diskhitar shifted to Kanchipuram.

Dikshitar was keen about worshiping Kanchi Kamakshi because he himself was a Srividya upasaka and Adi Sankaracharya had installed a Srichakra at Kamakshi Temple.

Some of these songs are:

A Sanyasi and Vedanti by the name Upanishad Brahmam had his ashrama at Kanchipuram.

Muthuswami Diskhitar continued to learn Vedanta from him.

Upanishad Brahmam was a devotee of Lord Rama.

He inculcated Rama-bhakti in Dikshitar.

From Kanchipuram, Muthuswami Diskhitar proceeded to Tiruvarur where he had spent his childhood.

Muthuswami Diskhitar composed a large number of kritis on Sri Tyagarajaswami including the Vibhakti kritis.

Srichakra has got nine Avaranas or circles.

The Upadevatas of Sri Lalita Parameswari surround her in nine circles.

They are eleven in number including a dhyana at the beginning and mangala at the end. They are as below:

The first eight Avarana kirtanas are in the eight vibhaktis of Sanskrit.

The last one has got all the eight vibhaktis in it.

There is also a sannidhi of Nilotpalamba at Sri Tyagarajaswami Temple.

Nilotpalamba is the form of Devi Parvathy while she was still doing tapas to get Lord Shiva as her husband.

Some of the other famous temples which Muthuswami Diskhitar visited and wrote kritis about are: Swamimalai, Mannargudi, Tiruvanaikkaval, and Sri Rangam.

Akshaya Linga Temple at Kivalur near Tiruvarur is very famous.

When he reached there, the archaka was about to close the temple.

Diskshitar requested to keep the temple open for some more time, but the archaka refused.

Diskhitar sat down and started singing before the closed sannidhi.

At the end of the singing, the doors opened on their own and gave him darshana.

Many people who came there listening to his singing witnessed this.

The ruler of Kulikarai, Vaidyalinga Mudaliar honored Muthuswami Diskhitar with a kanakabhisheka and later requested him to write a praise about himself.

Diskhitar politely refused and instead wrote the Ragamalika Sri Viswanatham with fourteen ragas in which he addressed Lord Shiva as the protector of Vaidyalinga (the ruler).

He played Shudda Maddalam. Once, he suffered from severe stomachache.

The cause could not be diagnosed.

Diskhitar checked his horoscope and found out that he was undergoing the trouble due to Jupiter planet.

He decided to compose a kriti to praise planet Jupiter, but later expanded the idea to include all the nine planets.

The Navagraha kritis are:

Thambiappan learned and sang the kriti Brihaspate regularly and was cured.

There, he lived on the same street as Syama Sastri.

They were good friends.

Thanjavur brothers (Ponnayya and brothers) were famous in the field of Bharata Natya.

They wanted to learn music from Muthuswami Diskhitar.

He taught them the 72 Melas system of Venkatamakhi.

When he visited Tiruvaiyar for the first time, Muthuswami Diskhitar sat before the sannidhi of the Devi and sang Dharmasamvardhani in Raga Madhyamavati.

A disciple of Thyagaraja saw this and informed him.

Thyagaraja invited him over.

At that time, Thyagaraja was doing Ramayana Parayana.

Surprisingly, Thyagaraja was reading and doing bhajana on Sri Rama Pattabhisheka on that day.

Muthuswami Diskhitar stayed at Thanjavur for about five years and then returned to Tiruvarur.

By this time, one of his brothers who had gone to Madurai, Chinnaswami had passed away.

He decided to go to Madurai to meet the other brother.

Upon reaching Madurai, Dikshitar learned that Baluswami had gone to Rameswaram on a pilgrimage.

Dikshitar waited for him to come back.

During his stay, he visited Meenakshi Temple every day and composed Vibhakti kritis praising Meenakshi.

He composed many more kritis on her and also on Sundareswara.

Muthuswami Diskhitar composed songs on many nearby temples as well.

His vision was to compose songs about all the famous temples like how the Alwars and Nayanars did.

From Madurai, he went to Alagarkoil and then to Rameswaram.

At Rameswaram, he learned that the ruler of Ettayapuram heard Baluswami singing and took him along as his Samsthana Vidwan.

On the way, at Sattur he learned that Baluswami was going to get married at Ettayapuram.

He joined a group of people who were going to attend the marriage.

On the way, they stopped over at a village and found that there was no water there.

Muthuswami Diskhitar prayed at the village Devi temple and sang Anandamritakshini in Raga Amritavarshini which he invented.

At the end of the song, it started to rain.

Yet another miracle performed by Muthuswami Diskhitar.

The Maharaja of Ettayapuram learned that Muthuswami Diskhitar was coming and gave him a grand welcome.

After the marriage, he requested him to settle down at Ettayapuram and accept him as his disciple.

Diskhitar agreed and spent the rest of his life at Ettayapuram.

While at Ettayapuram Muthuswami Diskhitar composed several kritis on temples in that region.

On the day of his demise, Muthuswami Diskhitar had the vision of Annapoorneshwari.

His Guru Chidambaranatha Swami had told him that the Devi would give him moksha.

Dikshitar knew that his time had come.

He did his daily yoga practice and performed Navavarana puja as usual.

All of a sudden, Maharaja of Ettayapuram visited him.

The royal elephant of the Maharaja went out of control and went to the cremation ground.

It wouldn't budge from there.

The Maharaja had come to get Dkshitar's blessings considering the incident as a bad omen.

Diskhitar told him there was no need to worry.

Thereafter, he called his shishyas and told them to sing Meenakshi Me Mudam Dehi in Raga Gamakakriya.

When the song ended, he told them to sing it again.

In the second round when they sang Meenalochani Pashamochani, he breathed his last.

The elephant also soon calmed down.

Maharaja of Ettayapuram said that Muthuswami Diskhitar was an avatara of Lord Karthikeya who returned to his abode on a Skanda Shashti (21, October, 1835).

A simple Samadhi Mandapam of Muthuswami Diskhitar has been built at the place of his cremation at Ettayapuram, 15 km from Kovilpatti.