Relationship Between The Vedas And The World We know that the Vedas are Mantras.

Mantras are vibrations of fixed patterns.

These vibrations can manifest into both matter and energy.

When Brahma chants these Mantras at the time of creation, the world comes into existence.

Veda Mantras are of three types:

Rigveda and Atharva Veda are made up of Richas.

Yajurveda is made up of Yajus.

Samaveda is made up of Samas.

Veda  explains how these Mantras manifest into the world.

Rigveda Mantras became all bodies, both movable and immovable.

Yajurveda Mantras became all the movements.

Samaveda Mantras became all the energies.

Atharva Veda Mantras connected all these together.

Are there 4 or 5 Vedas?
Veda Vyasa divided the single Vedic corpus only into 4 Vedas - Rigveda, Yajurveda, Samaveda, and Atharvaveda. However, the Mahabharata written by Vyasa is sometimes described as the 5th Veda since it contains a whole lot of knowledge.

Where is the real copy of Vedas?
Vedas are eternal. They exist in the form of sound and are hence called Shabda Brahma. Vedas have always been taught orally and not using a book. Vedas do not have an author. A more appropriate question would be when Vedas were written down first or when Vedas were printed first. 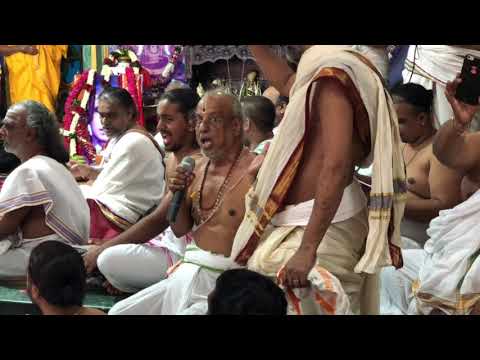