Nava Tirupati is a group of 9 Vishnu temples in the Pandiya desam of Tamil Nadu.

They are part of the 108 divya desams of the Sri Vaishnavas.

Thiruvazhuthi Valanadu is the area in which the Nava Tirupati is situated in a circular pattern around river Tamira Parani.

Nava Tirupati temples are places of worship for the Navagrahas as well even though there are no separate shrines for them.

Each of the nine temples is connected to one particular planet.

Srivaikundam Perumal Temple - An Asura called Somaka lived on the banks of Tamira Parani river. At the beginning of creation, he stole the Vedas and hid them underwater. Brahma was not able to create because of this. He prayed to Lord Vishnu. Bhagawan killed Somaka and gave the Vedas to Brahma.

The idol of the temple was lying underground for some time unattended. A cow used to come to that place and its udder would start secreting milk on its own at one spot every day as if a milk abhishekam was being done. The place was dug and the idol was recovered.

Vijayasana Perumal Temple - Bhagawan gave darshana to a devotee at this place. It is also called Varagunamangai Perumal temple.

Vaithamanidhi Perumal Temple, Thirukolur - Kubera was once cursed by Lord Shiva and he lost everything. He then did tapas here. Perumal gave him relief from the curse and restored his wealth. This is also the place where the legendary encounter between Ambarisha and Durvasa took place.

Thirupulingudi Perumal Temple - Lakshmi Devi and Bhumi Devi are both wives of Lord Vishnu. Bhumi Devi felt that she was being neglected. She went away and stayed at Pathala Loka. All the living beings started suffering because Bhumi Devi was not nourishing and protecting them anymore. They prayed to Lord Vishnu. He went to Pathala along with Lakshmi Devi, appeased Bhumi Devi, and brought her back. It is this aspect of the Lord called Bhumipalakar that is worshiped in this temple.

Makara Nedunkuzhaikathar Temple - Perumal was spending more time with Bhumi Devi on earth. Lakshmi Devi became upset. She asked Sage Durvasa to make herself prettier than Bhumi Devi. Sage Durvasa visited Perumal and Bhumi Devi. He got offended because Bhumi Devi did not treat him with respect. She was cursed by the Sage and lost her beauty. She started observing tapas on the banks of river Tamira Parani. One day she found a pair of ear ornaments having the shape of a crocodile (Makara Kundala) floating in the river. She presented them to Perumal and was blessed with beauty again. This is the place where this incident took place.

Srinivasa Perumal Temple, Tirukulandhai - Lord Vishnu’s devotee called Vedasaran lived here with his wife Kumudavalli. An Asura abducted Kumudavalli. The Lord rescued her. Their daughter Kamaladevi observed tapas here even when she was a child. That’s why the place is called Tirukulandhai.

Irattai Tirupati - They are a pair of temples called Aravindalochanar and Devapiran. Once a Sage called Suprabha came here to perform yajna. As the land was being plowed for the yajna, a balance (thola) and bow (villu) were recovered. They soon assumed the form of a man and a woman. They had been cursed by Kubera for disrespecting him. The Sage got darshana of Perumal here in the form of Aravindalochanar (eyes shaped like lotus petals). Perumal is also called Devapiran since the Lord appeared along with Devas on the completion of the Sage’s yajna. 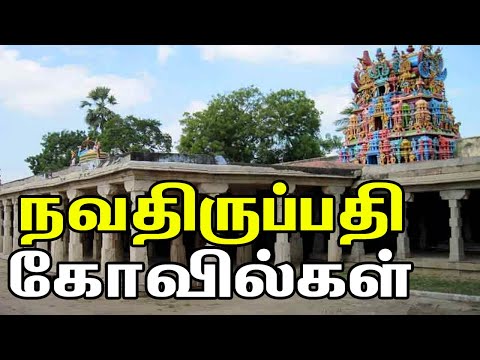