Varadaraja Perumal Temple is located at the eastern end of Kanchipuram, Tamil Nadu.

It is one among the 108 Divya desams of Sri Vaishnavas.

This temple was built by the Pallava rulers in the 9th century.

Brahma wanted to get darshanam of Perumal in his Chaturbhuja (with four hands) form.

For this, he observed tapas for a long time.

First, Perumal gave him darshanam in the form of water.

This is known as Pushkaram.

Brahma was not satisfied and continued his tapas.

Perumal again appeared in the form of a forest.

Brahma was still not satisfied.

Perumal told Brahma that to get darshanam the way he wanted, he should earn punya by performing a hundred Ashwamedha yagas.

Brahma found this difficult to do.

He prayed to Perumal for an easier way.

Performing Ashwamedha yaga once there is equal to a hundred yagas performed elsewhere.

His wish was fulfilled.

Anchi in Tamil means to worship.

Because Brahma worshiped Perumal there, it became known as Ka+Anchi+Puram.

When Akasha Bhoopati ruled Kanchi, there was a famine.

The king did not have a child.

He prayed to Kamakshi Devi.

She blessed him with a son.

On the occasion of the birth of the child, a huge anna danam was organized.

Kamakshi Devi herself took food disguised as an old woman.

At that time, there was a shower of gold.

The reason behind this was later found out.

When the grains for the anna danam were being cleaned, a bit of gold from the queen’s ring fell into it.

It got mixed up in the cooked rice.

Thus the shower of gold occurred as her blessing and Kanchipuram became prosperous.

He was famous for his charitable nature.

Once, when he had no money with him, his opponents sent a boy to him to ask for help.

A shower of gold occurred even at that time.

Tirumangai Alvar could not pay tax as he had spent all the money he had on the Thadi Aradhanai of Perumal.

He was imprisoned by the king.

Varadaraja Perumal appeared in the dream of the king.

The king was told about some gold hidden near Vegavathi river.

He was instructed to take it and release Triumangai Alvar.

There was going to be an attempt on the life of Ramanujar when he was on the way to Kashi along with his Guru and fellow disciples.

He foresaw this and escaped.

He lost his way in the Vindhya mountains.

Varadaraja Perumal along with his consort Perundevi came disguised as a hunter couple and showed him the way back to Kanchipuram.

They also showed him a well from which he should carry back water for bathing Perumal.

Thereafter, he performed teertha kainkaryam for Varadaraja Perumal every day.

He used to talk to Perumal while doing this.

When Ramanujar was planning for the revival of Vaishnavism, he got the approval of Varadaraja Perumal through Tirukkachi Nambi.

All his doubts were cleared by Perumal through Tirukkachi Nambi.

Doddacharyra was a great devotee of Perumal.

He lived in Sholingur, 60 k.m. away from Kanchipuram.

He used to attend the Brahmotsavam of Varadaraja Perumal every year.

As he turned old, he could not do that anymore.

Once, during Bramotsavam, Doddacharyar was standing sad and disappointed near Thanakkankulam in Sholingur because he was unable to attend the Brahmotsavam.

At that time, Garuda Sevai was going on.

As the procession reached the entrance of the temple, Perumal made the attendants hold the umbrellas in a slanting position so that Doddacharyar could darshanam even from far away.

Even today, this practice is followed.

The original idol (Moolavar) of Varadaraja Perumal is made of wood from Athi tree (Ficus racemosa).

Vishwakarma had made this for Brahma.

This is called Adi Hastigiri Nathar.

It is forty feet long.

But Brahma felt that continuous use of a wooden idol for puja may spoil it.

Another idol was made from stone and installed as the Moolavar.

The wooden idol was enclosed in a silver box and immersed in Anantasaras Pushkarini, the temple tank.

It is taken out once in forty years and worshiped for a mandalam before immersing it again.

The temple has got five prakaras.

Vayya Maligai - It is on Hastigiri hill. The garbhagriha is here and also the path for pradakshinam around it.

Thirumalai Pradakshinam - around the hill.

Madapalli prakaram, Alavandar prakaram - It is connected to the temple kitchen. Sannidhi of Perundevi Thayar is in this.

Alvar Thiruveedhi - Temples of the Alvars are in this. The tank holding Athi Varadar is in this.

In his Chaturbhuja Swaroopa, Varadaraja Perumal holds Shankha, Chakra, and Gada in his three hands while the fourth hand is held in Abhaya Mudra.

The temple is famous for its architectural beauty, wooden carvings and paintings.

There is a pair of motifs of lizards - one of gold and one of silver.

Gautama Rishi was their Guru.

Once, when they brought water for their Guru, there was a lizard in it.

Guru cursed them to become lizards.

They got relief from the curse with the blessing of Varadaraja Perumal.

Those who touch these lizards after worshiping Varadaraja Perumal will be relieved of all their troubles.

They are also prayed to for warding off the ill effects of a lizard falling onto someone’s body. 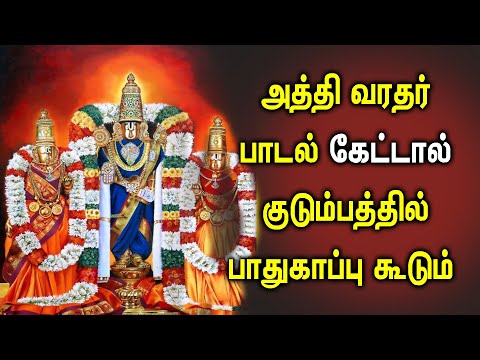