Listen to the audio above to learn the meaning of the 9th shloka of Shakradi Stuti. 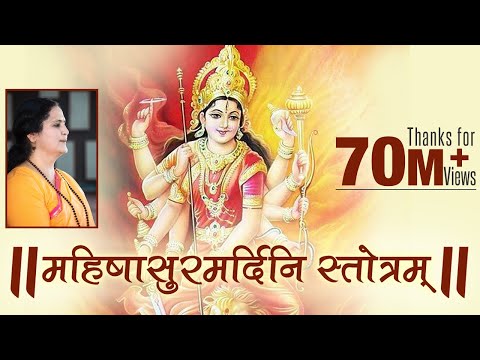 How many forms of Durga are there?
There are 64 forms of Durga. Aryadurga, Vedagarbha, Naikabahu, Bhadra, Kanya, Kamakshi, Bhagavati, and Joulambika are some among them.

Durga Devi in Mahabharata
Before entering into Virata capital for ajnatavasa, Yudhishtira prayed to Durga Devi with a stotra. Before the Kurukshetra war started, Krishna asked Arjuna to pray to Durga Devi. She appeared in the sky and blessed Arjuna with success.

Sri Suktam is in praise of which Devi ?
Click here to try more questions

After she killed Mahishasura devas and rishis are praising Devi.

This is in the 4th chapter of Durga Saptashati.

We have seen the meaning up to shloka number 8.

There are for Vedas.

They are in three formats:

Richa which is poetry with a fixed number of syllables in each line.

Yajus which is prose, like how you write in paragraphs.

And richas sung as song with swaras like saregama applied to them.

These are the three formats.

Rigveda and Atharva Veda are completely in poetry format, that is if you consider the Samhita portion.

Brahmanam portions of all the four Vedas are mostly in prose.

Yajrveda Samhita is mostly in prose.

Samaveda is divided into two parts:

In general, the Vedas as a whole are called Trayi because all the four Vedas exist in these three formats.

Now there is one thing to understand here.

The Vedas as we have them are audible.

At the time of creation, when Brahma and the Rishis who were his Manasa putras, when they received Veda and manifested the universe with it, what they received, the Veda as they received, was it in the same audible format?

There is a CD, if you put your ear to it, can you hear anything in it?

Because the music is stored there as magnetic patterns.

But when you play the CD in a player, you can hear the music.

So before creation, the Vedas existed in a different format.

During creation, the format changed and became audible mantras.

This is how the universe comes into existence.

So Vedas before creation which is knowledge of what to create, how to create, and also the raw material for creation as vibrations is what we call Shabda Brahama.

Then during creation, the Shabda Brahma gets converted into the three formats Rik, Yajus and Sama.

With the power to manifest everything, these are the Vedas as we have them today.

This is about creation.

Then the created universe needs to be administered.

This term stands for all kinds of occupations and livelihoods.

Interaction in the form of give and take that keeps the world running.

They are all you only.

You only remove all the troubles, all the sufferings, all the pain, all the dangers, all the hazards from the world.

It is not that they are safe.

Then Devi helped them.

It is not that she waved a magic wand and Mahishasura was dead.

She had to swing into action, engage in real battle.

Face crores of soldiers, commanders, and the Mahishasura himself.

She had to face them in real, like how every soldier has to do in the battlefield and eliminate them one by one, she had to apply intelligence, form strategies.

This is how she also works.

Not by waving a magic wand.

But ultimately, when someone is in trouble, you are the first one to be remembered.
Because you are the foremost among troubleshooters.

It is easy for you to remove troubles and miseries because you manifested yourself to remove dangers and trouble.

So it is easy for you to do that for anyone.

That is the purpose of your manifestation.

Evil forces self declare and surrender before Agni