Putlur Angala Parameswari also known as Poongavanathamman Temple is in the Chennai district of Tamil Nadu.

Click below to watch video on Putlur Amman Temple 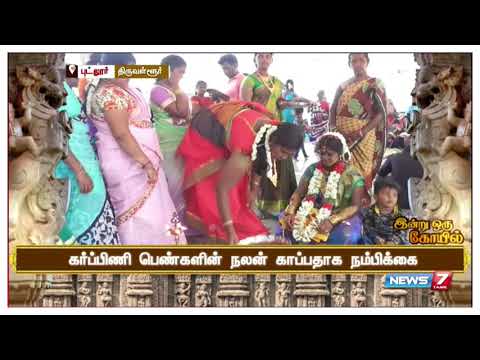 What is this temple famous for?

Lady devotees come to the temple in large numbers seeking Amman's blessings for a child.

Why the place is called Putlur

Once, Amman and Shivan were traveling disguised as a man and woman.

Shivan went to get water from the river Cooum.

It started raining heavily and the river was flooded. Shivan had to wait for a long time for the water level to come down.

When he got back, Amman had become tired and lied down.

She had turned into an anthill (putru).

Because of the anthill, the place became known as Putrur which later became Putlur.

Why Shivan is called Tandavarayan

When he returned and could not find Amman, Shivan became upset and did tandavam.

Why Amman is called Poongavanathamman

There was a farmer called Ponmeni.

He had taken a loan from a moneylender called Mahisuran.

He could not pay back in time.

Mahisuran threatened to kill Pomnmeni unless he tilled Poongavanam in one night's time and made it cultivable.

Poongavnam was a jungle and notorious for the presence of evil spirits.

Ponmeni knew that he will not be able to do it.

He prayed to Goddess Angala Parameswari and started tilling.

At that time, a man and a pregnant woman came there.

They asked for water.

When Ponmeni came back with water, they had disappeared.

Ponmeni continued tilling. Suddenly, at one place blood started coming out from the ground.

An oracle was heard that the couple were none other than Amman and Shivan.

Amman will be permanently present there in the form of an anthill.

An anthill sprang up from the ground.

Since Amman's presence was revealed because of Ponmeni, she blessed him with a lot of wealth.

The place where this took place was Poongavanam.

What is the form of Putlur Amman?

Putlur Amman is in the form of an anthill appearing like a pregnant lady lying down with her mouth open.

It looks as if she is having labor pain.

How to pray for a child here

The devotee lady desirous of a child should buy five lemons and bangles from the shops outside.

One lemon will be used by old ladies present in the temple complex to remove the evil eye.

It has to be crushed under the leg after drishti is taken out.

The devotee has to pierce three lemons with this trishoola.

She also has to tie a piece of clothe here.

The fifth lemon is handed over to the priest of the temple.

He will smear it with kumkuma and place it at Amman's feet along with the bangles.

When the lemon rolls down, it is given back to the devotee as prasadam.

She has to take it home.

The bangles are distributed among other devotees as prasadam.

When they become pregnant, many devotees perform seemantham here.

When blessed with a child, devotees offer saree, bangles, flower jadai, lemon, and different varieties of rice and pongal to Amman.

The annual festival is in the month of Adi.

A special event called Iruttu Kumbam is performed during this.

All lights are turned off for some time leaving the temple in total darkness.