Nathdwara is famous for its Sri Nathji temple.

It is at a distance of 45 km from Udaipur, Rajasthan.

History of the idol

The idol of Srinath Ji at Nathdwara was originally consecrated by Vajranabha, the great-grandson of Lord Krishna.

It was originally at Govardhan in Vraja Mandal.

He had come to Vrindavan.

After completing the parikrama of Govardhan, Sripada was preparing to take rest near the Govind Kund.

At that time, a cowherd boy came and gave him a pot of milk.

Sripada asked: how did you know I was hungry?

The boy said: I live in the nearby village.

In my village, nobody stays hungry.

That night, again the boy appeared in Sripada’’s dream.

The boy said: I am in the bushes and have been suffering from heat, cold, rain, and wind for a long time.

Sripada with the help of the villagers started searching and found an idol in the bushes.

The idol was installed as Gopalji and a temple was constructed by the ruler of the place.

Once, Gopalji told Sripada in his dream that he was feeling hot and he should get Chandan from Puri to cool him down.

On the way to Puri, near Balasore, there was a village called Remuna.

In Remuna, there was a temple of Gopinatha.

Gopinatha was offered a particular bhog called Amritakeli (a type of kheer) every day.

Sripada Madhavendra Puri Goswami wanted to taste it so that he could understand its recipe and offer the same to Gopalji in Jatipura.

But on that day, the bhog had not yet been offered to Gopinatha.

Sripada felt guilty for having had a desire for the bhog even before it was offered to the Lord.

He walked out of the temple.

Lord Gopinatha showed the priest of the temple that he had hidden a pot of the bhog for Sripada.

He asked the priest to look for Sripada and give it to him.

The priest searched him out and gave it to Sripada.

There was no limit to Sripada’s ecstasy.

From that day, Lord Gopinatha came to be called Kheera Chora Gopinatha,

Sripada proceeded to Puri and came back to Remuna with Chandana and camphor.

He came to Remuna again.

That night, Gopalji again appeared in his dream and said: I and Gopinatha are one and the same.

If you apply Chandana upon Gopinatha, my body would cool down here.

Accordingly, Sripada spent the rest of his days in Remuna serving Gopinatha until his samadhi.

After Madhavendra Puri, Vallabhacharya took over the worship of Gopalji at Jatipura.

From that time, Gopalji was also called Srinath Ji.

During Aurangazeb’s invasion in 1669, the idol was shifted from Jatipura and kept hidden in Agra for six months.

While being moved to Mewar by a bullock cart, the wheels of the cart got stuck at one place and would move no further.

Devotees believed that this must be the place chosen by Srinath Ji.

This place developed into Nathdwara (earlier known as Sihad).

According to the tradition of Pushtimarg, Srinath Ji revealed himself in Govardhan; first, only his left hand became visible and 69 years later his face.

It was Vallabhacharya who built a small temple for him initially  and later a big temple.

Specialty of the temple and worship

It is made from beautiful black marble.

The Lord is seven years old.

He is seen lifting Govardhan with the little finger of his left hand.

There are many carvings around the idol: two cows, a lion, two parrots, snakes, three sages, etc.

The Lord’s beautiful clothes are changed several times a day.

The temple’s design is similar to Nanda Maharaj temple in Vrindavan.

It looks more like a palace than a temple.

The Lord is also called Thakurji, the term for a chieftain.

The well of ghee

This includes cans of pure ghee.

The offerings to Srinath Ji are always prepared in ghee

The devotees pour the ghee that they bring into a well-like structure.

From that, it reaches the kitchen through a pipeline.

All the offerings such as sugar, flour, and jaggery are used up in the temple itself.

Nothing is sold outside.

Since the temple is left like a palace, there are separate store rooms for each item such as Phool Ghar, and Doodh Ghar.

Delicious sweets are distributed throughout the day as prasada of Srinath Ji.

Getting Srinath Ji’s darshan as soon as he wakes up is very auspicious.

In Mangala darshan, the door is kept closed for some time and then slowly opened.

He should not get startled if he sees a crowd as soon as he wakes up.

He might run out to play also if he finds the door open when he wakes up.

During Mangala darshan, his clothing would be light during summer.

In winter, it would be warm clothing.

It is a well-known fact that the sound of the Lord’s music would enchant and mesmerize people.

Srinath Ji is not given his flute during Managala darshan lest he plays it, people get immersed in it and forget their duties.

This darshan is dedicated to Saint poet Paramanand Das.

Ragas Lalita, Vallabha, and Vibhasa are used to sing Kirtans during this darshan.

This is after Srinath Ji is dressed up.

He is shown a mirror to make sure that it is the way he wanted.

He is offered sweets and dry fruits.

The flute is also with him in this.

This darshan is dedicated to Nanda Das.

This is the time Srinath Ji takes out his cows for grazing and plays with his Gopa friends.

The head of the cowshed of the temple comes and informs Srinath Ji that all his cows are keeping well.

Flute and flower decoration are not there in this darshan.

Srinath Ji is offered Makhan Mishri in this.

This darshan is dedicated to Govinda Swami.

This is the main meal of Srinath Ji in all royal splendor.

After the meal, the priest climbs to the terrace of the haveli and calls out loudly - Mala Begi Laiyo (bring my garland).

This is a signal that Srinath Ji is ready to give darshan to his beloved devotees.

Paan beeda and water are placed near him and he wears a big and beautiful garland.

Srinath Ji can be seen with his flute, a cane to play ball, and a mirror.

This darshan is dedicated to Kumbhan Das,

After Rajbhog Srinath Ji is supposed to be taking a nap out there in the field.

At 3.30 pm, he is woken up by blowing the shankha indicating that it is time for him to get back home with the cows.

This darshan is dedicated to Surdas.

A light refreshment is offered to Srinath Ji when he returns to the haveli.

The role of the guard is to notify Swamiji that her beloved is back.

Any evil eye cast upon the Lord when he was out is removed by waving a bunch of peacock feathers.

This darshan is dedicated to Chaturbhuj Das.

Aarti is done to remove the ill effects of any negativity that has affected Srinath Ji when he was out grazing the cows.

The Sudarshan Chakra on top of the haveli is offered food.

Seven flags on top of the haveli are wrapped up indicating that the end of the day is approaching.

This darshan is dedicated to Cheetah Swami.

The priest climbs to the terrace of the haveli, calls out to the cook, and tells him to come early the next day.

This ritual is called Rasoiya Boli.

Various delicacies are offered to Srinath Ji and Swamini Ji along with Paan beedas.

The bed is prepared.

Food, water, and Paan beedas are kept near the bed.

Dress and ornaments for Swamini Ji are also kept.

A carpet is laid from the idol and to the bed.

All obstructions on the path are removed.

Srinath Ji spends his nights in Vraj Mandal during this time.

This darshan is dedicated to Krishna Das. 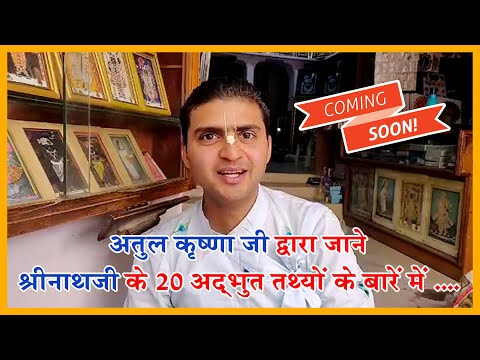