Once the world is created it would last for 4.32 billion years.

This period is called a Kalpa.

After that a pralaya would destroy everything.

At the time of pralaya, all worlds such as Bhumi would be submerged underwater.

At the end of the previous Kalpa….

Manu was the ruler of the earth.

He was the progenitor of mankind.

One day, he was offering tarpana (offering water filled by holding both palms together) for the forefathers at River Kritamala.

A small fish got trapped in the water in his palms.

He was about to put it back into the river.

The fish said: please don’t do that.

I am scared of the cruel animals in the river.

Manu put the fish into his pot and took it back to the palace.

By the time he reached the palace, the fish had already grown as big as the pot.

Manu transferred it to another bigger vessel.

The fish kept on growing.

It was put into a pond, then into a lake, and finally into the sea.

Manu knew that it was no ordinary fish.

With folded hands he told the fish: I realize that you are none other than Sriman Narayana.

The fish said: yes, you are right; I am Narayana.

I have taken avatar as matsya (fish) to protect the world.

Seven days from now, pralaya is going to happen.

At that time, a boat would appear.

You invite the Saptarshis into that boat and also get seeds of everything required to create the world again.

There will be huge waves during pralaya.

You should keep the boat tied to my horn to keep it stable.

Stay in the boat till the time Brahma is ready for the next creation.

(After pralaya, it is the night of Brahma for 4.32 billion years. Creation happens again after that.)

After saying this, the fish disappeared.

After seven days, the world started submerging into water.

At that time a boat and huge fish appeared.

Manu followed Bhagawan’s instructions and stayed in the boat till it was time for the next creation.

When Brahma woke up and started creating again, he delivered his duty as the progenitor of man again. 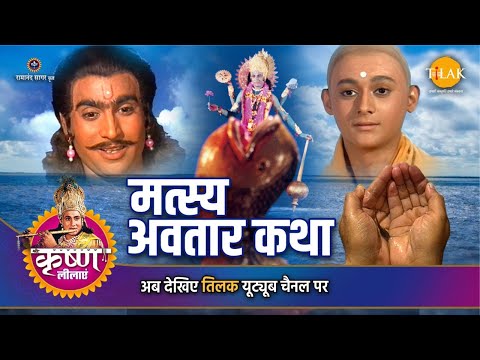