Yamaraja Teaches Nachiketas About The Two Types of Yajnas

As his second boon from Yamaraja, Nachiketas wanted to know about that Agni which enables one to attain Swarga.

As we have seen in the previous episode, this is called Swargya - Agni.

It is by following this procedure that Swarga can be attained.

Yamaraja taught him that.

Whatever Yamaraja taught, Nachiketas repeated after him.

This is the oral form of learning, the traditional learning.

Yamaraja became quite pleased with Nachiketas seeing his eagerness, grasping power, and intelligence.

What did Yamaraja teach Nachiketas?

This is part of Veda called Chayanakanda.

Unless you read Upanishad along with Aranyaka, and Brahmana, it is very difficult to understand.

Because these procedures and the principles behind them are described in the Brahmana part of the Veda.

Upanishad is the essence of the Veda.

But unless you know what the gross is all about, how will you understand the essence?

Only a Medical professional will be able to understand a Medical journal.

A layman can not make a head or tail out of a Medical journal article.

Antisense Oligo­nucleo­tide for SOD1 ALS is the title of an article published in a Medical Journal.

It is written in English.

But unless you are a Medical professional, can you make anything out of it?

The same is the case with Upanishads also.

Unless you have a fair idea about what is there in the Vedas, you will not be able to understand the Upanishads.

There are two types of yajnas, Soma and Chiti.

In Soma, something is offered in Agni and Agni consumes it.

Once it is consumed, it can not be seen separately.

In Chiti, Agni itself is offered as ahuti in Agni.

If it is a material, Agni will digest it.

If it is Agni that is offered, then Agni will not be able to digest it.

If you keep on adding Agni to Agni, it will go on building above and above.

You can see both of these in nature.

These are all processes in nature.

There is Agni is the stomach, the digestive fire that consumes it.

This is also Yajna.

All the Devas reside in the body of man and consume food with the help of this Agni.

Nature is full of Somas and Chitis.

All kinds of energies are Agni.

Here there is no consumption, it is compounding.

The year is the primary unit of time

This is happening round the year.

We are saying round the year because year is the primary unit of time.

Years comprising the seasons are identical.

Seasons are not identical.

But one year is exactly the same as the previous year and the next year.

Do you get it?

Today is cloudy, tomorrow may be sunny.

That’s why we say that year is the primary unit of time.

Collectively, if you look at the consuming aspect of the year, it can be called Samvatsara Agni.

What is offered in the Samvatsara Agni?

All consumers together are called Samvatsara Agni.

All that are consumed together are called Paarameshti Soma.

Now, there are four types of Soma yagas: Havis, Graha, Vaja, and Raja.

If the Soma or what is offered is Havis of the cooked form, it is called Haviryajna.

An example is fortnightly Darshapurnamasa yaga.

Rajasuya is a Raja Soma yajna.

These are the four categories of Soma yajnas.

This is not all.

There are thousands of Soma based yajnas.

Yajna is a creative process or an evolutionary process.

The creator, Prajapati is at the core, center of it.

Symbolically, they are represented by 720 bricks which are used to construct the Agni chayana.

The concept of attaining Swarga or any such plane is like establishing control over the same.

How elaborate the yajna is going to be depends on what it is that you want to achieve.

For example, if someone wants to control a small village, performing an ishti called Sangrahani is good enough.

For having control over the Swarga, for having one followed in Swarga, having a place in Swarga, yagas such as Ashwamedha are performed.

Agni chayana has many stages spread over years.

On a Chaitra Amavasya, the yajamana starts his deeksha.

On the next Chaitra Amavasya, it is Somakraya.

Vishnukrama stands for how Vamana conquered the three worlds with three steps.

By performing 180 Vishnukramas and 180 Vatsapras, the 360 days are taken under control.

Only what the yajamana wishes would happen round the year.

Yajamna comes in complete sync with the world around him.

In such a manner as the yajna progresses yajamana becomes more and more powerful and achieves the world he wants.

This Agni which is being built has two parts: Chitya and Chitenidheya.

Chitya is the physical fire, Chitenidheya is its divine aspect.

Like an idol and chaitanya or prana in it.

Let’s say there is an idol in a temple.

Its power, is it only limited to that idol or the temple?

No, it spreads far beyond.

If it is a village temple, the power spreads at least till the boundary of the village.

Circle of influence of Agni

When it comes to Agni, this circle of its influence is called Vashatkara Mandala.

This Vashatkara Mandala can be divided into 33 parts of levels.

In the first 17, from the center, Agni resides.

In the next levels upto 33, Soma resides.

These levels are called Aharganas.

If you consider the Aharganas as encircling the earth; if you are performing a yajna on earth, then the Agni called Parthivagni reaches out up to the 21st Ahargana.

This is where Surya is.

At the 21st level above or around the earth.

This is where the Swarga of Indra is.

If you reach up to here on the merit of your karma, you can be there for some time, but you will have to come back and take rebirth.

Immortality means you don’t have to die again.

If you take birth, you will have to die.

Immortality does not mean that you will not have to die in the ordinary sense.

Only if you are not born you will not die.

If you go beyond Surya mandala or the 21st level from the earth, you will not be born again.

That’s why Veda says that only Chayana can give you liberation.

There is no liberation or moksha without performing Chayana.

Progress of the yajamana

If a yajamana performs Chayana once, he can go up to the 17th Ahargana.

It is also called Nachiketa Swarga.

The 21st Ahargana is at its center.

This level can be reached if the yajamana performs 2 Chayanas.

If the yajamana performs 3 Chayanas he goes beyond the 25the Ahargana.

For him, there is no rebirth.

The 21st is called Soura Vidyut.

Beyond the 25th the yajamana is in the world of Soma.

Soma is amrita which gives immortality.

When you say that the Devas drank amrita and became immortal this is what it really means.

From the earth to the sky, there are three worlds: Bhumi, Antariksha, and Dyou.

Agni is the Lord of Bhumi.

Vayu is the Lord of Antariksha,

Surya is the Lord of Dyou.

The material side of these three worlds represents solid, liquid, and gas.

In the Chitya and Chitanidheya concept Agni, Vayu, and Surya are the Chitanidheyas of these three worlds.

If you want to name them alternately as forms of Agni itself, then they are Vaiswanara, Taijasa, and Prajna.

These three, Bhumi, Antariksha, and Dyou are the material worlds.

If you consider the human body as a miniature universe, then their Lords reside in Muladhara, Hridaya, and Sahasrara respectively.

Depending on how many Chayanas the yajamana has performed he achieves the Ahargana for which he has become eligible.

The Agni is called Lokadi here.

Lokadi means the source of the world.

Agni which is immortal and the source of the mortal world.

The details of this is what Yamaraja taught Nachiketas. 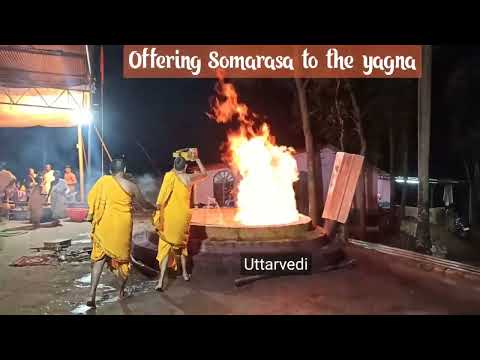