Guru Ram Singh Ji was the second Guru in the Namdhari sect of the Sikhs.

His parents, Jassa Singh and Sada Kaur were engaged in agriculture.

He was influenced by the teachings of Guru Balak Singh Ji.

Guru Balak Singh Ji was the founder of the Namdhari sect.

Ram Singh Ji left the army to get involved in the Kuka movement started by Balak Singh Ji.

After returning from the village, Ram Singh Ji started a small shop in his village.

He formed a group with a few patriotic friends from the army.

He built many Gurdwaras for the Namdhari sect.

A troop of well-developed soldiers was developed by him.

Ram Singh Ji preached that fighting for the freedom of the motherland was an integral part of religion.

He implored his followers to:

His followers accompanied him in thousands wherever he went.

His soldiers were sent to Kashmir for special training.

The British government was promoting cow slaughter by establishing slaughterhouses all over Punjab.

The Kukas opposed this and raided many slaughterhouses killing the butchers.

The most prominent among these was the raid at Malerkotla on January 15, 1872.

The British troop managed to contain the movement and brutal punishments were meted out to many Kukas.

Some were tied to the tips of cannons and blown to pieces.

The British reported his death in prison on 29, December 1885.

Namdharis believe that Guru Ram Singh Ji escaped to Russia and continued his fight for the freedom of the motherland from there. 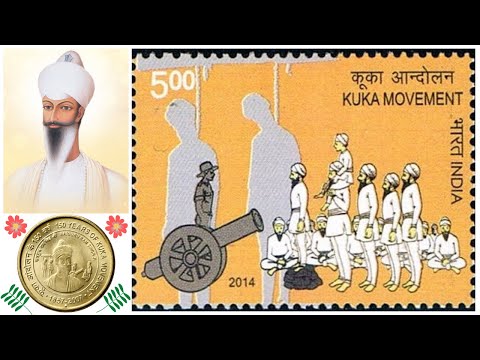 Seven Ancient Kingdoms To The West Of Sindhu