Thirukalukundram Temple is located at a distance of 15 k.m. from Chengalpattu, Tamil Nadu.

It is also known as Vedagiriswarar Temple and Pakshi Teertham.

There are two temples: one on a hilltop dedicated to Lord Shiva and one at the foothill dedicated to Goddess Tripurasundari.

The Shiva Linga is swayambhu.

Why is it called Vedagiri?

Sage Bharadwaja lived up to a hundred years learning the Vedas.

He prayed to Lord Shiva and wanted his life to be extended by another hundred years since he had not finished learning.

Like this, he got his life extended two more times by a hundred years.

When he became 400 years old, Shiva appeared before him.

The Lord created a mountain in front of him.

Then he took a fistful of soil and gave it to Bharadwaja.

Shiva told Bharadwaja: That mountain is the Vedas.

Compared to that, what you have learned so far is equal to this fistful of soil.

Bharadwaja realized that acquiring knowledge was not the way to moksha.

It is through sincere devotion that the Almighty can be attained.

Vedagiri means the Vedas in the form of a mountain.

It is this form of Lord Shiva that is present here.

Two eagles come to the hilltop temple every day around noon.

They are called Shambu and Aadhi.

They were two overzealous Rishis who were cursed by Shiva.

They are fed every day here.

It is believed that they take bath in Rameswaram every morning, take food at Thirukalukundram, and sleep at Kashi.

Thirukalukundram means the hill of the sacred eagles.

There is no Nandi in this Shiva Temple

Nandi once disobeyed Shiva and prevented Garuda from coming to the temple.

Due to this, the Lord dismissed Nandi from here.

Why do devotees come here?

The tank of the temple is called Shangu Teertham.

Devotees also pray for relief from asthma and hypertension.

Once in twelve years Indra comes here to worship Lord Shiva in the form of lightning.

The lightning enters the temple without causing any damage and does pradakshina three times.

A conch shell (Shangu) appears in the temple tank once in twelve years.

Since he could not find a conch, he created one by the power of his tapas.

He also declared that every twelve years one such conch will appear in the Teertham.

Similar to Tiruvannamalai, circumambulation of the hill is performed by thousands of devotees every Purnima day. 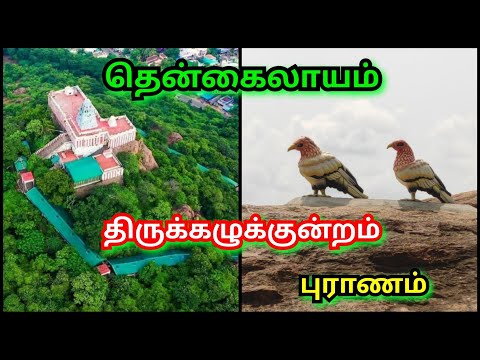