Srikalahasti Temple is of which God?

His consort is called Gnanaprasunambika.

Lord Shiva, Srikalahastiswara gave moksha to all three due to their extreme devotion to him.

At the peak of their devotion, they did not mind giving up their life even.

The spider weaved its web around the Shiva linga to protect it and worshiped the linga throughout.

The Lord decided to test his devotion.

One day, a wind caused the temple to catch fire from a lamp.

The spider furiously attacked the fire risking his life.

The spider was granted moksha.

A snake brought precious gems from the Nagaloka and worshiped the linga with them.

After the snake, an elephant came with bilwa leaves and water from the nearby river.

The elephant removed the gems and offered what he had brought in their place.

When the snake came back the next day, he saw the gems removed and leaves placed in their place.

He removed the leaves and kept the gems again.

After the snake was gone, the elephant came again with leaves and water.

He again removed the gems and did pooja with leaves and water.

This went on for a few days.

The snake got angry and wanted to know who was removing the gems.

He waited after his pooja, hiding himself.

When he saw what the elephant was doing, he slid inside the trunk of the elephant and bit him. The elephant smashed his face against the wall killing himself and the snake.

Srikalahastiswara gave moksha to both.

Images of the spider, snake, the tusks of the elephant are seen inscribed on the Shiva linga.

Once, a fight broke between Adi Shesha and Vayudeva as to who was superior.

Adi Shesha coiled himself around Mount Kailasa to prevent Vayudeva from entering.

Vayudeva created a typhoon and tried to break in.

The mountain is called Sivanandaika Nilayam and Kannappa Mountain.

Kannappa is a Nayanar, one among the 63 Saivaite Saints of South India.

He was a rebirth of Arjuna.

He was born a hunter.

His original name was Thinnan.

He was a great devotee of Srikalahastiswara.

Being a hunter, he used to bring the flesh of killed animals and offer it to the Lord.

He filled his mouth with water from the nearby Swarnamukhi river and performed abhisheka with it.

He did this unfailingly every day.

One day, the Lord decided to test his faith. Kannappa noticed that one of the eyes of the Lord (linga) was bleeding.

He plucked his own eye and kept in its place.

Then the second eye of the linga also started bleeding.

As he was about to pluck his second eye, he thought: I will go totally blind.

How will I know the position of the eye?

So he kept the big toe of his foot to mark the position of the eye on the linga.

As he was about to pluck his second eye, the Lord stopped him.

The Lord gave him back his eye.

Due to this act of offering his own eye to the Lord Thinnan became famous as Kannappa (Kannu means eye).

There are five very important Shiva lingas called Pancha bhoota lingas, each representing one among the five primary elements.

Vayudeva worshiped a Karpoora Shiva linga for a long time.

When Lord Shiva appeared before him, Vayudeva asked for three boons.

It is believed that the temple was originally built by Pallava kings.

Several kings of the Chola and Vijayanagara dynasties have contributed to the construction and upkeep of the temple complex.

Devi did tapas at Srikalahasti and Shiva gave her back the divine body far more beautiful than before.

Swarnamukhi, the river of Srikalahasti is also called Divya Ganga.

The pooja is preferably performed during Rahu kalam.

On Saturday, Sunday, and Monday the temple closes at 9.30 pm.

It is at a distance of 3 km from the temple. 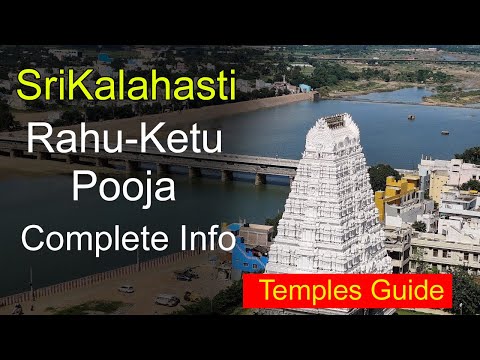 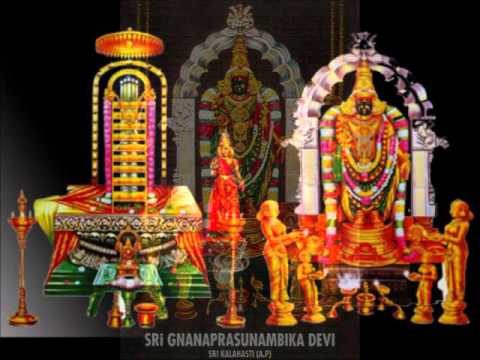